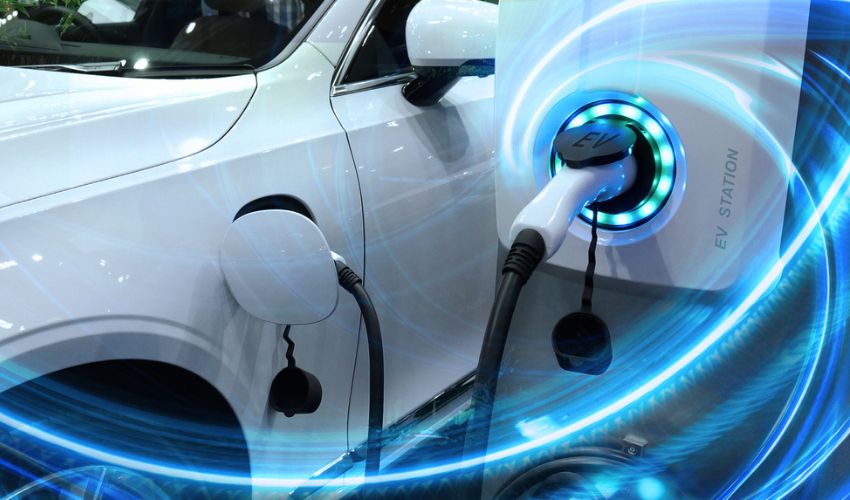 The future is here and it’s electrifying. While slick hair and leather jackets from Grease are making a comeback, the gas-powered Ford De Luxe convertible that played the titular role of Greased Lighting is not. Once a niche section of the automotive industry, electric vehicles are becoming more mainstream by the year.

By 2035? Experts say we might be leaving the gas cans at the door.

While 1% in total of all cars on the road in the United States, consumers’ adoption of electric vehicles has increased 50% a year since 2015. More so, despite the global pandemic, the market is poised to reach target goals of 50% of all car sales by 2035 if steps are taken now. Several of these milestones have been achieved over the past 4 years with continued strides toward bigger and brighter incentives.

Even with the effects of the global semiconductor shortage, EV sales pushed forward. With no signs of slowing and world governments only pushing for the adoption of EVs in all facets of transportation, what makes electricity more attractive than gasoline?

Don’t let the price tag fool you, looks can be deceiving. Purchase prices for EVs are still more expensive than conventional gasoline vehicles. The U.S. Department of Energy’s Alternative Fuels Data Center reports that these prices will “likely equalize with conventional vehicles as production volumes increase and battery technologies continue to mature.” This initial larger cost is quickly offset through numerous incentives.

There are federal tax credits and state utility incentives for going electric with $2,500 to $7,500 tax credits for new purchases determined by vehicle size and battery capacity. Beyond tax credit and other incentives from government bodies, electric vehicles also do well at keeping their own costs down.

Electric vehicles reduce fuel costs with a much greater fuel economy. In a study by FuelEconomy.gov, it was found that the 2021 Toyota Corolla Hybrid has an estimated 52 miles per gallon (MPG) while the conventional 2021 Toyota Corolla has an estimated range of 34 MPG. That’s an 18 MPG difference between the two. While there are other determining factors such as all-electric vehicles versus hybrids, load carried, and duty cycles EVs continue to maintain a strong fuel-to-cost advantage.

According to the New York Times, the Biden administration seeks to promote electric vehicle sales nationwide by offering up to $12,500 in tax credits. This goal has run into strong opposition in Congress, but there is a push for greater incentives for buyers of electric vehicles. Even without the greater incentive, the demand to purchase EVs has only increased.

There is no better example than Tesla. One of the electric vehicle manufacturer titans, Tesla saw an increase in orders in late 2020, during the worst of the pandemic, by 45%. While not inspired by the pitfalls of the pandemic—now highly appropriate given the attention by Congress —Tesla sought to decrease reliance on Asia-based chipmakers. Tesla decided to produce their own chips in-house. These chips would not be entirely silicon, as most mass-produced semiconductors are, but instead, a new technology called silicon carbide (SiC).

Tesla was the first automaker to use these SiC chips in the mass-produced Model 3s to great success. With as much as 50% reduction in energy loss, Tesla’s investment sent ripples through the automotive industry. Hyundai Motor will use SiC chips in their next generation EVs and Renault, a French automaker, signed with STMicroelectronics for a supply of SiC chips in 2026.

Silicon carbide is not the only rival silicon possesses. Gallium nitride (GaN) chips show just as much promise in reducing energy loss, about one-tenth, of what silicon chips lose. Diamond substrates are also being tested for power-producing chips with a theoretical ability to cut energy loss to one-50,000th as much as silicon. The only pain point here is the price of diamond substrates to the relatively cheap and common silicon.

These new improvements in semiconductor chip technology are only the latest development in evolving tech that branched out from the EV industry. These advancements are not limited to electric cars, but numerous methods of transportation from electric trucks, buses, and beyond. Semiconductors are the cornerstone of any electrical device, and these improvements benefit the entire electronics industry.

If these new chips can reduce energy loss in EV vehicles imagine what they will do for other technologies.

According to a study conducted by the U.S. Department of Energy, 30% of the total U.S. energy needs are utilized by transportation. Furthermore, transportation accounts for 70% of gasoline consumption in the U.S. This massive impact on energy security within the United States is often threatened during times of political tension.

Energy security is defined by the International Energy Agency (IEA) as reliable and affordable access to all fuels and energy sources. There are aspects of energy security, the IEA explained, that includes “long-term energy security deals with timely investments to supply energy in line with economic developments and environmental needs. On the other hand, short-term energy security focuses on the ability of the energy system to react promptly to sudden changes in the supply-demand balance.”

Members of the IEA, such as the U.S., are obligated to hold the equivalent of at least 90 days of net oil imports. This is in case of severe oil supply disruptions which are as unpredictable as are common. Transport costs and gasoline prices have risen sharply due to Russia’s invasion of Ukraine. Because of inflated gas prices, transportation costs for materials have also risen leading to inflation across the board as companies try to offset these energy costs.

So how can electric vehicles help this problem? The answer is simple.

Clean energy and electric vehicles have worked in alignment since the beginning. More so, is working to reduce the amount of energy wasted through electrical processes. Gasoline-powered vehicles typically use lead-acid batteries while EVs are equipped with lithium-ion batteries. These are the same batteries found in laptops and cellphones. Lithium-ion batteries have several benefits over the typical lead-acid battery, which include greater energy density, more prolonged charge hold, and being made of individual cells over one large unit.

These new batteries continue to be a significant improvement but do have limitations. While the rising implementation of charging stations at different locations to refuel EVs helps, many organizations are looking to produce a 1,000-mile range battery per charge. The Department of Energy’s Joint Center for Energy Storage Research at Argonne National Laboratory continues to research new ways for large-scale improvements of batteries.

The Advanced Research Projects Agency-Energy (ARPA-E) is investing in new types of batteries and cost-effective alternatives for electrical motor materials. These projects could reduce our dependency on foreign oils by 30-60%. Not to mention, these battery breakthroughs are just as important to the electronics industry as the EV industry. Better working, longer lasting, and cleaner batteries could have a ripple effect on everything from consumer electronics to medical devices.

In 2017, The European Battery Alliance was formed to create a competitive, sustainable battery-manufacturing value chain in Europe with aims to establish 10-20 “gigafactories.” China and Japan followed soon after in 2018 to establish battery guidelines and encourage standardization of high-performance battery production.

If the future is electric, batteries are one of the pillars to support that.

5. Lower Emissions and a Cleaner Environment

It’s one of the biggest points on the list, electric vehicles being better for the environment. But what exactly does that mean for the electronics industry and consumers? How can this benefit of EV translate to our needs?

Well, first we can start with health. Global climate change and the impact of air pollution have been a concern since the late 1940s and made headlines in 1970 with the Clean Air Act. Transportation has been identified as the largest source of climate pollution and the reliance on gasoline and diesel-fueled automobiles continues to impact the environment negatively. This comes in the form of various long-term health problems including asthma, lung damage, and heart conditions.

A study from Duke University in 2015 found there’s a hidden cost to these issues. Besides the initial price that you pay at the station, there’s an additional $3.80 per person in health and environmental costs with every gallon of gasoline purchased. The diesel used in farm equipment and large rigs to even costlier at $4.80 per gallon. That total reaches nearly $2,000 a year for every person. These social costs are equated to the treatment of diseases caused by this fine particulate matter pollution or PM2.5. It is estimated that air pollution kills 7 million people every year.

Electronic vehicles have a carbon footprint half the size of the average gasoline-powered car. For those electric vehicles still produced by manufacturers that rely on gas or coal-powered machinery to produce these vehicles, the added health and environmental costs per year are $1,000. For electric vehicles that are made by manufacturers who use alternative energy sources such as wind or solar energy, that cost is reduced to $300.

Get Your EV Needs Met with Area51 Electronics

Electric vehicles are no longer a niche within the automotive industry. While there is still a long way to go before the number of electric vehicles on the road equals 50%, everyone is doing their part to reach that goal faster. Even now, automakers have stopped investing in internal combustion engine technology, instead allotting that money to the restructuring of their production lines for electric vehicles.

With government policy, private investments, and rising consumer demand the EV market is only going to continue to grow. If you haven’t invested in the production of EV-friendly products now’s the time to do it. Area51 Electronics will be there to help provide you with the support needed to make this transition.

As an authorized and independent electronic components distributor, Area51 Electronics has the portfolio to help your company embrace the switch to EV. With over 160 authorized lines and an excellent quality management system your electric future is in good hands.