What is an Electronic Component? 7 Basic Components That Help Power Our World 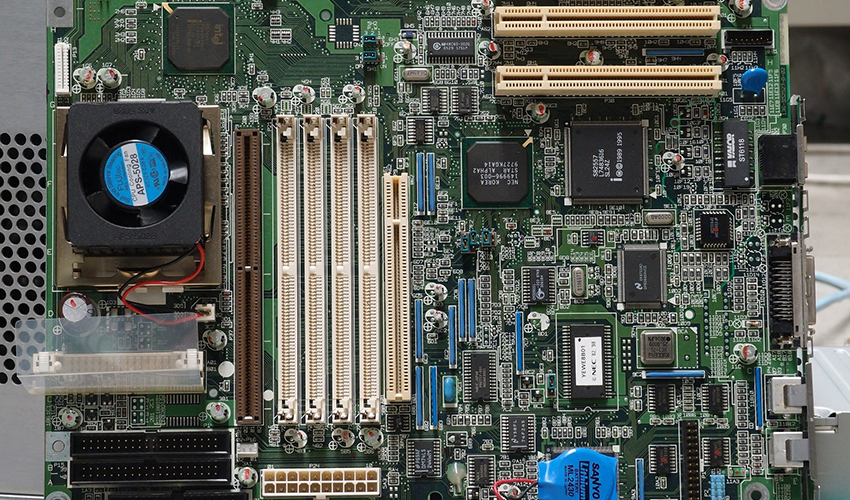 Electronic components can be found in nearly every device that touches our fingertips. They are vital to a multitude of gadgets throughout the world; from the military jet engine, to smart home devices and automobiles, to simply switching on a light. With the evolution of electronic devices in the past century, electronics have become increasingly complex and yet must be increasingly reliable. But what exactly is an electronic component?

Active Components are Found in Every Electronic Device :

1. Transistor: An electronic component that is mostly used for amplifying electrical signals or as switching devices. These can be easily identified by their three terminals and can be thought of as a relay without moving parts, as they can turn something ‘on’ and ‘off’ without any movement.

2. Diode: A component that allows electric current to flow in one direction only. It has two terminals, the anode and cathode. When the anode is charged with a positive voltage and the cathode with a negative one, electric current can flow. Reversing these voltages will prevent the current from flowing, thus it is the electronic equivalent of a check valve. It is commonly used to convert an alternating current (AC) into a direct current (DC) and is made either of a semiconductor material or vacuum tube.

3. Integrated Circuit (IC) (AKA Microchip): Multiple complex circuits on a circuit board compose an IC which is used to perform all kinds of tasks yet it is still considered a component despite consisting of many other components. They’re made up of tiny, flat pieces of silicon that consist of layers of many electronic components such as transistors.

Passive components can only receive energy, which it then either dissipates, resists, absorbs, or stores in an electric or magnetic field, yet they cannot control or amplify electricity themselves. Some of the most common examples include resistors, capacitors, inductors, and transformers.

1. Resistor: Aptly named, a resistor is a two-terminal electrical device that resists the flow of current. It is one of the simplest elements in an electronic circuit as well as one of the most common, as resistance is an inherent element of nearly all electronic circuits. Resistors are graded based on their power ratings (amount of power they can handle without exploding) and resistance values (capacity to resist current). The measurement is done in units known as ohms.

2. Capacitor: (No not the flux capacitor Marty!) these electronic components have two terminals that can store the electric charge temporarily in an electric field and release it later, when needed. They allow AC to flow through them while resisting DC and in doing so stabilize almost any circuit. Capacitors come in different varieties, with the most common ones being electrolytic and ceramic disk.

3. Inductor (AKA reactor): A two-terminal component that stores energy in a magnetic field and returns energy to the circuit when required. It allows DC to flow through it but not AC. It is composed of a coil wire that is wound around a core which can be either a magnet or even air.

4. Transformers: An electronic component that is often used to raise voltage levels. Transformers can step up or step down voltage, yet power and energy remain the same on the primary and secondary side. As energy is not actually being amplified, a transformer then is classified as a passive element.

Putting It All Together

Electronic components are put together to power all the electronic devices throughout our lives – from the computers in our homes and cars to the complex machinery in industrial operations, medical facilities, military vehicles and beyond.

As the need for reliable electronic devices continues to grow, especially during the massive semiconductor chip shortage, so does the need for reliable electronic components. Area51 Electronics is your trusted global distributor of electronic, electrical and electromechanical components, hardware and assemblies. We specialize in authorized manufacturer lines while also being an independent distributor of hard-to-find, obsolete (end-of-life) verified components. Area51 Electronics’ duty is to deliver, protect and advance the technology standards in the supply chain and in our communities that help power our world.

Understanding more about these basic electronic components that power so many aspects of modern life will inspire greater appreciation for these tiny parts. After all, without them, you would not be reading this today!