Suez Canal Blockage and Chip Shortages: Another Dent to the Supply Industry? 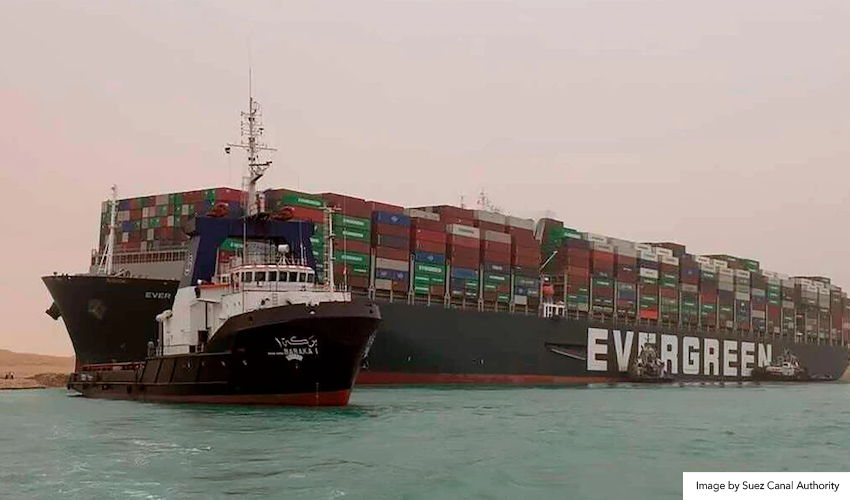 The global supply chain hit another snag. This time, in the form of a large container ship named Ever Given. The vessel recently ran aground in the Suez Canal, blocking one of the world’s busiest trade routes connecting Europe and Asia – causing a logjam of hundreds of cargo ships. Roughly $9.6 billion worth of goods pass through the canal every day, according to a recent AP article citing an estimate from shipping journal, Lloyd’s List.

But first, a bit of good news. Salvage teams managed to dislodge the massive ship last week. The bad news: the temporary blockage could significantly impact an already strained global supply chain for weeks to come.

Logistics experts say some of the more immediate effects of the Suez Canal blockage could be felt in higher gas prices and extended shipping delays for consumer products, including furniture, clothing, electronics, heavy machinery, and more.

But it’s the semiconductor industry that is most vulnerable to disruptions from shipping delays. In fact, some analysts have stated that any delay in supply could have devastating effects on semiconductor production, especially in automobile and consumer electronics’ production.

The Suez blockage is just another setback for an industry experiencing unprecedented shortages due to the Covid-19 pandemic and an imbalance in semiconductor supply and demand.

Other factors exacerbating the crisis include the severe winter weather in Texas in February, which forced Samsung Electronics, NXP Semiconductors, and Infineon to shut down factories temporarily, according to Reuters. A recent fire at a Renesas Electronics automotive-chip factory in Japan is another in a string of events that have worsened the situation.

Automobile manufacturers like General Motors, Ford, Toyota, Volkswagen, Honda, Nissan, Stellantis, and Suburu have had to adjust production as a result of the shortage. Carmakers are increasingly becoming more chip-reliant – the more technologically-advanced the car, the more chips it uses. Everything from touch screen monitors, to power steering, brake systems and parking cameras – all require the use of semiconductors.

Despite the bad news, there is light at the end of a tunnel. President Joe Biden recently signed an executive order that will help build more resilient and secure supply chains for critical and essential goods, including semiconductors. The executive order directs a comprehensive 100-day review of supply chains to address vulnerabilities in semiconductor development and advanced packaging, critical minerals, pharmaceuticals, and large capacity batteries, such as those used in electric vehicles.

Biden added that he would seek $37 billion in funding for legislation to ramp up U.S. chip manufacturing. The majority of semiconductor production occurs in Asia. Only 12% of the world’s chip manufacturing is done in the U.S., a dramatic decrease from 37% in 1990, states the Semiconductor Industry Association (SIA).

But manufacturers are stepping up to the plate to increase U.S. chip production. Intel CEO Pat Gelsinger recently announced its plans to invest $20 billion to build two new factories in Arizona. The strategy – called IDM 2.0 – looks to position Intel as a major provider of foundry capacity in the U.S. and Europe to serve customers globally and answer demand for semiconductor manufacturing.

GlobalFoundries, one of the world’s leaders in specialty semiconductor manufacturing, also is answering the call to address the current chip shortage. According to a CNBC article, the company plans to invest $1.4 billion in its chip factories this year, and possibly double the investment next year. GlobalFoundries is based in the U.S. and is considered the largest “pure” foundry, which is a factory that produces metal castings.

Don’t Wait and See – Be Proactive, Not Reactive

The best strategy to managing your supply chains, especially during these uncertain times, is to be proactive, rather than reactive. Experts advise against a wait-and-see approach.

Work with your trusted distribution partner in creating a contingency plan as an alternative course of action, in the event of challenges like the semiconductor shortage, Suez blockage or a natural disaster arising. Your distribution partner can help you manage and navigate any risks.

A distributor offering a diverse supply chain by collaborating across the aisle – from authorized to independent lines – will help you better optimize your supply chain and build up your inventory, which can be critical during times of disruption and market uncertainty. As the saying goes, it’s always best to be on the offense, instead of playing defense. By preparing ahead with your distribution partner, you can be one step ahead of the game for even the most challenging events.